Our practice is happy to offer patients a variety...

The fundamental principle of Homeopathy is the Law of...

Let’s Get To Know Homeopathy

The term ‘Homeopathy’ comes from ‘homeos’ meaning similar and...

In fighting day to day exposure to the various...

Maybe you’ve put off seeing a chiropractor for years...

In fighting day to day exposure to the various microbes, we  largely depend on our own body’s ability to fight these infections. This ability, which the body learns to develop over years of various kinds of pathogenic exposures, is called “Immunity” and the systematic organization within our body that keeps it functional is our “Immune system”. This term, though in vogue only recently, has been the core of the entire structure of Homeopathy for over 200 years.

Homeopathy is one of the oldest, holistic, “INDIVIDUALISED MEDICINE” systems. Homeopaths prescribe a specific remedy based on the individuality and characteristic of the symptoms of the patient, and not just based on the name of the diagnosis. Hence, two people who may have the same diagnosis, but demonstrate different patterns of symptoms, maybe prescribed two different remedies. Sounds a little absurd? Homeopathy explains this beautifully.

Here is an example:
Two people are diagnosed with flu. One has a stuffy nose, is unable to blow out the mucous, dry cough, low-grade temperature, with a good appetite, thirst, and energy levels. The other has a profusely runny nose, wet cough, high temperature with complete loss of appetite, thirst, and extreme exhaustion. The mainstream medical system would prescribe the same antihistamine and antipyretic drug to both patients. However, an individualized medicine approach would appreciate the difference in the conditions of both patients and prescribe based on this difference because, that is what differentiates one from the other, and that is where their bodies are telling the caregiver what they need! Every individual responds differently – to a physical stress, emotional trauma, stimulus, infections, and also to medicines.

Let me give another example. There are two children at the doctor’s clinic. Both have high-grade fever for 2 days. Both have no cough, cold or other symptoms associated with it. Both have lost their appetites. Both are dull and not active. A regular medical approach will inquire about all these physical conditions, look for clinical signs of dehydration, infection, or inflammation (the most common causes of a high temperature) and prescribe the same anti-febrile medication to break the fever along with supportive therapy of hydration. However, when a Homeopath would look at both these patients, he would not only note all the physical symptoms, the clinical signs, the examination findings, but also would probe into the emotional state of the patient prior to the onset of fever. Turns out, the first patient was stuck in an elevator all by himself for an hour the morning of the day the fever started, leading to immense fear, while the second child had played in the park for a little too long with the sun shining bright on his head!

These two, become the more crucial points of differentiation for the Homeopath to make his prescription. And sure enough, when the prescription is selected based on these, keeping in mind all the clinical signs and symptoms, but individualizing the two similar, yet different cases, the patient is sure to heal! Because such a prescription takes care of the internal imbalance in the patient’s body and does not just cover up the symptoms that are portrayed outwards.

When this happens, what the Homeopathic remedy is actually doing, is correcting the internal imbalance/deficit and empowering the body to fight its own battles. Thus, improving the body’s immunity and general state of well-being. Of course, supportive therapy of hydration, nutrition and rest is invaluable at such times, irrespective of the mode of medication chosen.

It is a well-established fact that our emotions and state of mind play a huge role in our physical well-being. Negative emotions, an unpleasant state of mind, stress, etc. have a direct impact on the cortisone levels, which in turn has an impact on the immune system. Thus, by giving importance to this aspect of an individual’s health status, Homeopathy plays a huge role in building, boosting, and maintaining the immune system of an individual 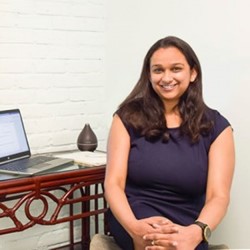 Contact us today to schedule an appointment with Chaitali. She offers in-office and virtual consultations. If she determines that you can benefit from other services in our interdisciplinary practice she will refer you to another practitioner.